Irish Times Walk for the Weekend: Journey through the ages in Cavan Burren Park Michael Guilfoyle 2/3/2016

This new visitor park rewards a leisurely perambulation in the snow 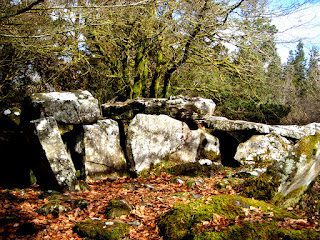 
The plan had been Slieve League that mid-January day. But an overnight change in air mass, from clear and cold to misty and milder, would have meant an unrewarding (and possibly unsafe) slog in low cloud and wet snow.


A hastily put together “Plan B” emerged – to visit Cavan Burren Park. This new (2014) park is about 4kms outside Blacklion in the intriguing and unfrequented Borderlands of west Cavan. And so a short drive from our base in Sligo into increasing snow cover – consistent with entering the traditionally coldest area of our island – took us to the park’s tasteful stone-built visitor centre.


A deeply chilling mist enveloped us as we arrived, and hung over the car park and high snowy limestone plateau land of the park. It stole in and around the open exhibits and information panels of the centre, and only the tracks of a lone visitor and her dog disturbed a snow cover abandoned now to a slow thaw in the changed air mass.


The panels in the centre (and en route around the park) introduced us to the fascinating story of the Cavan Burren – starting with a “deep space view” of Earth’s tectonic plates repeatedly embracing and pulling apart in their slow dance, and ending with the ancient and modern social history and archaeology of the park area.


And in between we read of sedimentary processes in long-gone rivers and seas, of Ice Age landscape formation and deformation, of pre-glacial fossil ‘dry’ valleys and waterfalls, of active subterranean water flows and cave systems – and of our early farmer ancestors and their enigmatic stone tomb creations, sometimes laboriously assembled from glacially-shifted boulders of sandstone.


And thus equipped we set off in the snow, guided over the park’s many trails by the clear maps available there, to witness the geological and prehistoric signatures left by a restless Earth and the labours of our ancient ancestors.


We wandered through hundreds of millions of years of ancient “frozen” geology, many tens of thousands of years of mindless glaciation and erosion and at least 6,000 years of a mysterious though mindful human story. This we did along easy prepared paths and boardwalks, intersecting the Cavan Way as we went.


Natural and man-made features were carefully and clearly explained on information panels cleverly embedded in trailside wooden posts. They mixed and evoked stories of both science and mystery, with the clinging mist and snow conjuring more of the latter than the former. Indeed, a slightly unsettling aura seemed to us to surround the icy-cold stone tombs of these long-gone ancestors of ours. And the absence of distant reference points that day gave us feelings sometimes of wandering lost in a fairy ring.


This is a fascinating and wonderfully educational park. It is well worth a visit to cavanburren.ie, and then a slow journey on foot around this very special park. Do it on an elemental day, because it’s an elemental place.


Start/finish: Visitor centre 4kms from Blacklion; left onto R206 off the N16 just west of town, signs for Cavan Burren


Suitability and effort: easy, prepared tracks, selection of trails (including Cavan Way)
Posted by Nuala at 14:42 No comments: